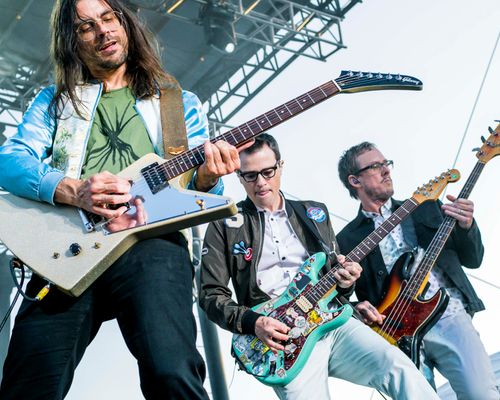 Weezer formed as a rock band in 1992 in Los Angeles, California. The band members include Rivers Cuomo, Patrick Wilson, Brian Bell, and Scott Shriner. In 1994, Weezer released their self-titled debut album, which became a multiplatinum success. After a hiatus, the band returned in 2001, with a more pop sound and their 2005 single "Beverly Hills" became Weezer's first single to top the US Modern Rock Tracks chart and the first to reach the top ten on the Billboard Hot 100. Among much success, Weezer has sold 10.2 million albums in the US and over 35 million worldwide, received awards for music videos, and received a dedicated fanbase within the pop and rock scene. In 2020 they announced their tour with Green Day and Fall Out Boy.